A girl called GL lives on the eleventh floor of a block of flats. Every morning when she goes to work she takes the lift down to the ground floor. When she comes home in the afternoon, she presses the button for the eighth floor and walks up the last three flights of stairs. How come?
Answer: She is too short. She does not reach button number 11.


​Imagine that you are in a boat, in the middle of the sea. Suddenly you are surrounded by hungry sharks, just waiting to feed on you. How can you put an end to this?
Answer: Stop imagine.

Marc's mother had four children in all. The first one was named May. The second and third were called June and July respectively. What was the fourth child's name?
Answer: Marc

You are driving some people around in a bus. Four people get on at the first stop and three get off. Seven people get off at the second stop and five get on. At the third stop, two get off and six more get on. What would you say is the color of the driver's eyes?
Answer: You were driving the bus remember?

A man and a son were driving home one rainy night. They had an accident. The father died on the spot. The people who were nearby took the son to the emergency room. The surgeon refused to operate on the boy, saying "I cannot operate on him, he's my son!" How is that possible?
Answer: The surgeon was his mother.

An airplane crashed into a field. Every single person in the aircraft died. But two people survived. How come?
Answer: They were not single they were married.

If a plane crashed on the border of Country A and Country B, where would you bury the survivors?
Answer: You don't! They are still alive.

What is broken every time it's spoken?
Answer: The silence.

What comes once in a minute, twice in a moment, but never in a thousand years?
Answer: M

How could a cowboy ride into town on Friday, stay two days, and ride out on Friday?
Answer: The horse is called Friday.

Why do birds fly south for the winter?
Answer: It is too far to walk.

What letter of the alphabet is always waiting in order?
Answer: Q

What stays in the corner and travels all over the world?
Answer: A stamp.

What has one head, one foot and four legs?
Answer: A bed.

Why didn't the skeleton go to the dance?
Answer: It had no body to go with.

What do prisoners use to call each other?
Answer: Cell phone

What goes up when the rain comes down?
Answer: An umbrella.

What goes up and down but doesn't move?
Answer: The temperature.

What do you call a witch on the beach?
Answer: A sandwich.

What month has 28 days?
Answer: All of them.

If a rooster is standing in the middle (at the highest point) of a slanted barn roof, on which side would its egg roll down?
Answer: Neither, roosters don’t lay eggs.

If your uncle’s sister is related to you but is not your aunt, what is the relation?
Answer: Your mother.

A man is wearing black. Black shoes, black socks, black trousers, black jacket, black hat and black gloves. He is walking down a black street with all the street lamps off. A black car is coming towards him with its light off but somehow manages to stop in time. How did the driver see the man?
Answer: It is daytime.

A little girl kicks a soccer ball. It goes 10 feet and then comes back to her. How is this possible?
Answer: Kicking straight up in the air.

How can you drop a raw egg onto a concrete floor without cracking it?
Answer: Concrete floors are very hard to crack! 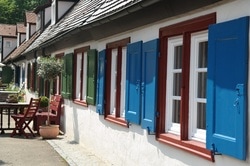 Read the sentences and try to find out who drinks tea.
​
Answer: The Australian drinks tea.